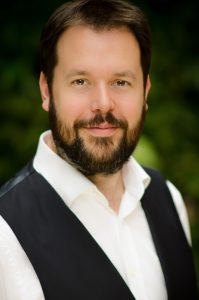 Sholto Kynoch is a sought-after pianist who specialises in song and chamber music. He is the founder and Artistic Director of the Oxford Lieder Festival, which won a prestigious Royal Philharmonic Society Award in 2015, cited for its ‘breadth, depth and audacity’ of programming. In July 2018, Sholto was elected a Fellow of the Royal Academy of Music in the RAM Honours.

Together with violinist Jonathan Stone and cellist Christian Elliott, Sholto is the pianist of the Phoenix Piano Trio, an ensemble that has been praised for creating a ‘musical narrative of tremendous, involving depth’. In recent years, he has curated several series of recitals at the National Gallery, including their ‘Monet and Architecture’ exhibition in 2018. He has recorded, live at the Oxford Lieder Festival, the first complete edition of the songs of Hugo Wolf. Other recordings include discs of Schubert and Schumann lieder, the complete songs of John Ireland and Havergal Brian with baritone Mark Stone, a recital disc with Anna Stéphany, and several CDs with the Phoenix Trio.